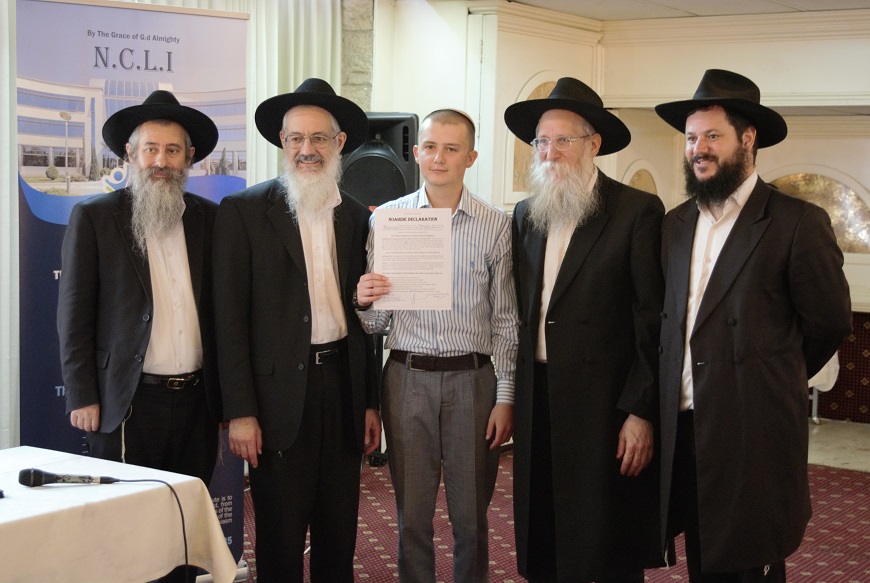 Letter of Greetings and Blessings from

I take this occasion to write to you in honor of the birthday on 11 Nissan of the spiritual leader of the generation, Rabbi Menachem Mendel Schneerson, who made our generation aware of the possibility and ability, and the great obligation, to spread to the Children of Noah the teachings of God’s Torah that was given through Moses: they should all accept upon themselves the Universal Commandments that were commanded to Adam and Noah and all humanity after them, and accept the yoke of the Kingship of Heaven completely.

As his students, we call upon all people to believe in the One God, the only Creator of the universe, and to fulfill His commandments joyfully since they are the true correction for everyone, both as individuals and as societies overall.

The Festival of Passover has been celebrated by the People of Israel for more than 3300 years as the Festival of Freedom, for during the original Passover, God came to redeem us from slavery and bondage and made us into a people, and bequeathed to us His Torah at Mount Sinai though Moses His servant.

From the Festival of Passover everyone can learn the great faith and trust that is fitting for every person have in God alone, that He is the one Who redeems and saves, as the People of Israel have believed in the salvation of God for thousands of years.

It is also fitting for all people to believe and trust that the Lord, God of heaven and earth, takes care of everyone and assigns to each person a role and purpose in the world. This role begins with a person coming to complete faith in God, accepting the yoke of His Kingship and observing His commandments, and doing these things with joy.

An additional and important point we learn from the Festival of Passover – according our Sages of blessed memory – is that just as our ancestors were redeemed from Egypt, likewise in the near future we will be redeemed by the true Messiah from the House of David. He will redeem the People of Israel from the exile, and bring us to the Land of Israel, and build our holy and splendorous Temple.

This is also part of the Festival of Freedom: we celebrate not only our past freedom from Egypt, but also our belief and anticipation in our future freedom that God promised to us.

The future redemption through the Messiah will resemble the redemption of the People of Israel from Egypt through Moses our teacher, but it will be great and wondrous, in a more wonderful form, compared to the miraculous redemption from slavery in Egypt that is recorded in the Book of Exodus.[1]

One of the wonders of the future redemption is the revelation of the Divine light that will shine onto the whole world, to all humanity.[2] From the power of this light, all people will recognize the true existence of the Master of the world, Who fills the whole world, as stated by the prophet Isaiah (52:8-10): “with their own eyes they will see that God returns to Zion. Burst out, sing glad song in unison, O ruins of Jerusalem together, for God will have comforted His people; He will have redeemed Jerusalem. God has bared His holy arm before the eyes of all the nations; all ends of the earth will see the salvation of our God.”

Just as Moses our teacher at Mount Sinai began to repair the world, including all the Children of Noah by giving the Seven Commandments that were commanded to them, so too, the Messiah will teach and show the world (but in a more wondrous manner) the same recognition in the truth of the Creator of the universe which began to be revealed by Moses.

It is a great merit for each and every one of us to bring himself and his community to the faith and anticipation of this future freedom for the whole world. This will be freedom from evil and falsehood, and a redemption by which we will merit to go out from darkness to a great and true light.

How great are the words of Miamonides (Rambam) in Laws of Repentance, Chapter 3: “It is necessary for every person to view himself throughout the entire year as if he were equally balanced between merit and liability, and likewise the world as equally balanced between merit and liability … if he performs one mitzvah [good deed], he tips his balance and that of the entire world to the side of merit and brings deliverance and salvation to himself and others.”

Each and every one of us who accept this should add in deeds of goodness and kindness, and will merit to have a part of this great light that is destined to shine in the world through the Messiah.

Our Holy City of Jerusalem

[1] As explained in Chassidic teachings on the verse Michah 7:15, “As in the days of your exodus from Egypt, I [God] will show you wonders.”

Does Torah have a Universal Perspective on Mourning?