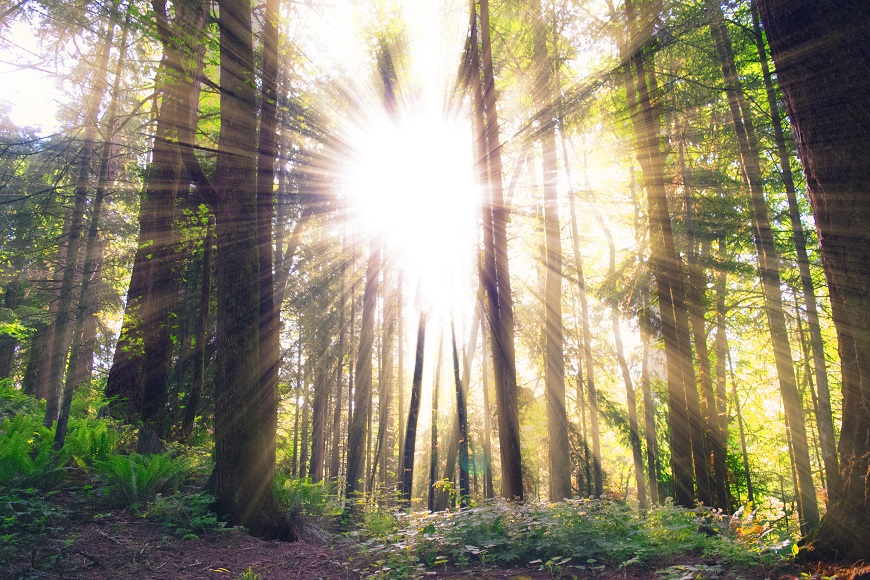 “Know this day and take unto your heart that Havaya is Elokim (God is the Lord) in the heavens above and upon the earth below; there is no other” [Deut. 4:39].

For would it occur to you that there is a god dwelling in the waters beneath the earth, so that it is necessary to negate it so strongly as to say, “Take unto your heart?”

The Baal Shem Tov of blessed memory, has explained that “Your word” which You uttered, “Let there be a firmament in the midst of the waters…,” [Gen. 1:6] these very words and letters stand firmly forever within the firmament of heaven and are forever clothed within all the heavens to give them life, as it is written,”The word of our God shall stand firm forever” [Isa. 40.8] …

For if the letters were to depart even for an instant, God forbid, and return to their source, all the heavens would become naught and absolute nothingness, and it would be as though they had never existed at all, exactly as before the utterance “Let there be a firmament.”  And so it is with all created things in all the upper and lower worlds, and even this physical earth which is the “Kingdom of the silent” (inanimate).

If the letters of the Ten Utterances  by which the earth was created during the Six Days Of Creation were to depart from it but for an instant, God forbid, it would revert to naught and nothingness exactly as before the Six Days of Creation. This thought was expressed by the AriZal (Rabbi Yitzchak Luria Ashkenazi, 1514-1572) of blessed memory, when he said that even in completely inanimate matter, such as stones or earth or water, there is a soul and spiritual life-force – that is, the enclothing of the “Letters of speech” of the Ten Utterances which give life and existence to inanimate matter that it might arise out of the naught and nothingness which preceded the Six Days of Creation.

Indeed, this is an even greater miracle than, for example, the splitting of the Red Sea.  For then, God drove back the sea by a strong east wind all the night and the waters were divided and stood upright as a wall. [Ex. 14:21-22]  If God had stopped the wind, the waters would have instantly flowed downward, as is their way and nature, and undoubtedly they would not have stood upright as a wall… how much more so is it in the creation of being out of nothing which transcends nature and is far more miraculous than the splitting of the Red Sea, that with the withdrawal of the power of the Creator from the thing created, God forbid, it would revert to naught and complete non-existence.  Rather, the Activating Force of the Creator must continuously be in the thing created to give it life and existence.  These forces are the “letters of speech” of the Ten Utterances by which [beings] were created…

Now … every intelligent person will understand clearly that each creature and being is actually considered naught and absolute nothingness in relation to the Activating Force and “Breath of His mouth” (Ps. 33:6) which is in the created thing, continually calling it into existence and bringing it from absolute non-being into being… that alone continuously brings it forth…  Hence, there is truly nothing besides Him.

The exact parallel to this illustration is the relationship between all created things and the Divine flow (of the life force) from the “Breath of His mouth,” which flows upon them and brings them into existence.  God is their source, and they themselves are merely like a diffusing light and effulgence from the flow and spirit of God, which issues forth and becomes clothed in them and brings them from naught into being…The term “existence” can be applied to all created things only [as they appear] to our corporeal eyes, for we do not see nor comprehend at all the source, which is the spirit of God, that brings them into existence… But the illustration is apparently not completely identical with the object of comparison. For in the illustration, the source (the sun) is not present at all in the space of the universe and upon the face of the earth where its light is seen as actually existing.  Whereas, all created things are always within their source, and it is only that the source is not visible to our physical eyes.

If so, why are they not nullified in their source?

It is written, “For a sun and a shield is Havaya Elokim.” (Ps. 84:12)  The explanation of this verse:  “Shield” is a covering for the sun, to protect the creatures so that they should be able to bear [its heat].  As our Sages of blessed memory said, “In Time to Come (the Messianic Era), the Holy One blessed be He, will take out the sun from it sheath, the wicked shall be punished by it…” [Talmud, Nedarim 8b]. Now, just as the covering shields [i.e. conceals] the sun, so does the name Elokim shield [i.e. conceal] the name Havaya, blessed be He.

The meaning of the name Havaya is “That which brings everything in to existence from nothing,” … indicating that the action is present and continuous.  For the fact that they were created during the Six Days of Creation is not sufficient for their continued existence, as explained above.  In the enumeration of the praises of the Holy One, blessed be He, it is written, “the Great, the Mighty” (Deut.10:17), etc.

“The Great” refers to the attribute of Kindness and the spreading force of the life-force into all the worlds and created things without end or limit so that they shall be created from nothing and exist through Gratuitous Kindness.  And the attribute of Kindness is called Greatness for it comes from the greatness of the Holy One, blessed be He, in his Glory and Essence, for “G-d is great and His greatness is unsearchable” (Ps. 145:3), and therefore, He also causes life-force and existence from nothing to issue forth for an unlimited number of worlds and creatures, for “It is the nature of the beneficient to do good.”…

And just as it is impossible for any creature’s mind to apprehend His attribute of Geatness, which is the ability to create a being out of nothing and give it life, as it is written, “The world is built by kindness” (Ps. 89:3), exactly so it is not possible for him to apprehend the Divine attribute of Might (Restraint), which is the quality of Tzimtzum (contraction) and restraint of the spreading forth of the life-force … in a revealed way, but rather with His Countenance concealed.  For the life-force conceals itself in the body of the created being and it appears as though the body… has independent existence… The concealing of the life-force is called “Vessels” and the life-force itself is called “Light.” [The “Vessels” and “Light” in combination are the revealed ten Divine Attributes (Kindness, Might/Judgement, Mercy/Beauty, etc.)]

Concerning this the Sages of blessed memory said, “Originally it arose in God’s thought to create the world with the attribute of stern judgement (i.e., complete concealment); He saw, however, that the world could not endure, so He combined with it the attribute of mercy,” that is, the revelation of G-dliness through the Righteous (such as Noah, Abraham, Moses, etc.) and the signs and miracles recorded in the Torah.” … Before the Messianic Era, it is only the Righteous in the heavenly Paradise who are granted the reward of comprehending the spreading forth of the life-force and light which issues from these two Divine Attributes, Kindness and Might.

Selections from The Gate of Oneness and Faith, by Rabbi Schneur Zalman of Liadi (1745-1812),  pub. Kehot Publication Society, Brooklyn, NY.

The content of this page is reproduced from Asknoah.org, with permission.

What does G-d say about this?! The United States, a Faithful Superpower

The Ultimate Revelation of the Messianic Era