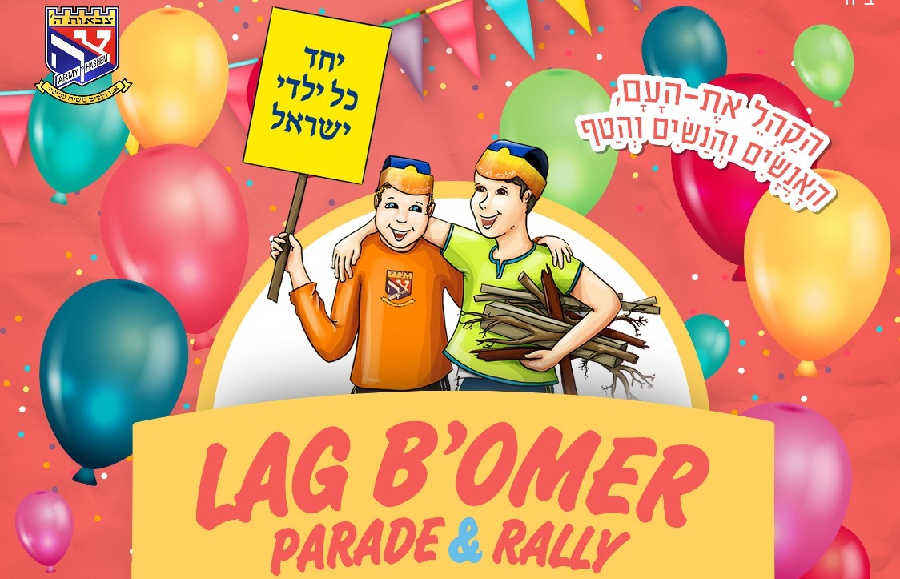 A public address by the Rebbe, Rabbi Menachem M. Schneerson, at the 19’90 Lag B’Omer parade in Brooklyn, New York. Presented with permission from Sichos in English.[1]

Lag B’Omer (33rd day of the Omer counting, on 3 May in 20’18) is the anniversary of the passing of the great Talmudic sage, Rabbi Shimon bar Yochai, whose teachings highlighted the concept of unity by drawing attention to the verse, “How good and how pleasant it is for brothers to sit together.” [Psalms 133:1]

Difference need not lead to division. On the contrary, true unity comes from a synthesis of different – and even opposite – thrusts. Thus, we see that the patriarchs Abraham, Isaac and Jacob represented three different approaches to Divine service – Abraham represented the love of God; Isaac, the awe of God; and Jacob, the harmony between these opposites. Yet together, they established the one and unique spiritual heritage of the Jewish people.

This unity has a broader scope, encompassing all of mankind – Gentiles and Jews. Indeed, it extends beyond the human realm to include the totality of existence, since we are all God’s creations.[2]

Our awareness of this fundamental oneness affects our relationships with our fellow men and the world at large. The various differences between people are thereby overshadowed by what is common to all of us. Therefore, a person need not feel “threatened” by the difference between him and others. Instead, he should reach out to others with love and seek to help them. Should he see an undesirable quality, rather than reject his colleague, responding with negative feelings, his feelings of compassion should be aroused. He should try to help the other correct his fault, thereby allowing the oneness between them to be complete.

This is one of the meanings of tzedaka [usually translated as “charity”], which properly signifies “righteous behavior.” Tzedaka does not mean merely giving a charitable donation to a needy person, but rather offering another all the assistance that is necessary, be it material or spiritual, thereby removing the factors which may disrupt the unity between individuals or between nations.

Harmony in the Cosmos

This approach is the key to peace and unity in the world at large. God has provided ample and abundant blessings in the world He created “with grace, with kindness and with mercy” [quoted from the Grace after Bread [3] authored by Moses]. He has called on mankind to emulate these qualities by sharing God-given benefits with others, helping them materially and spiritually.

Recognizing the abundance of God’s blessings and man’s role in their preservation and appropriate use will remove the basis for strife and division among nations. Once mankind realizes that God has provided abundance for everyone, there will be no motivation for war or even strife. Indeed, adopting this approach adds to the blessings God grants in the world at large and averts the “need” for Him to use temporary measures – earthquakes and the like – to remind us of His constant presence and His control.[4]

Similarly, this approach will refine the world and hasten the coming of the era which will express its ultimate state of perfection, when “One nation will not lift up a sword against another, nor will they learn war any more.” [Micah 4:3] This unity will be extended even beyond the human realm, spreading into the animal kingdom, as it is written, “A wolf will dwell with a lamb and a leopard with a kid.” [Isaiah 11:6] Indeed, it will encompass every aspect of existence.

The Family as a Chain

The goodness and blessing God grants will be reflected in the personal “world” of each individual, and in particular, in what is the most important wish of each man, his home and his family, so that he will derive genuine pleasure from his children and grandchildren. [There is no] justification for a gap between generations. Rather, every family – be it Jewish or non-Jewish – should be an integral entity, communicating and passing down true values from generation to generation.

Indeed, we are beginning to notice in the world at large a restoration of communication between generations, a realization of the great resource we have in our parents and grandparents. This awareness enables the present generation to transmit the knowledge, experience, and values of the past to the future.

The process of communication is the essence of education. It has been the positive force shaping the progress of civilization throughout history. Similarly, it is the desire for an environment conducive to education that is at the core of the turn of events we have witnessed in the past months, and which are characteristic of this unique year, 5750, a “Year of Miracles.”[5] Regimes based on an educational system which employed force and fear to transmit their values have given way to a system which allows for an environment conducive to the natural motivation for development possessed by every child.

Through the establishment of an environment of warmth, love, joy, and disciplined freedom, we will enable all children to develop their God-given potential without intimidation or hindrance by fear, and inspire them to dedicate themselves to a life of positive activity, spreading good throughout the world.

The Meaning of a Parade

The essential aspect of a parade is the expression of pride in one’s beliefs and values. A parade provides an opportunity to demonstrate this pride to others. In a parade, furthermore, one does not stand still, indicating the need to continually proceed further in positive activities. The main participants in this parade are children, who reflect the concepts of progress and growth more noticeably than adults. Each year, and even each season of the year, their bodies grow. This physical growth should be accompanied by spiritual growth, which, in turn, should be reflected in changes of behavior, and an increase of good deeds.

Joining this parade are representatives of the city, state, and national government, indicating that they share the desire to spread love, brotherhood, and peace. This is further emphasized by their manner of participation – including arranging for bands to play music – for music spreads happiness and encourages communication and peace. This will be accomplished by encouraging education – in particular, by promoting the observance of the seven universal laws commanded to Noach and his descendants, and by spreading the practice of tzedaka, righteous and charitable conduct.

To inspire these activities, a special silver coin has been minted for this occasion, to be distributed to all the participants. In the Holy Temple in Jerusalem and in its service, silver and other material goods were used to create a dwelling for God. In a larger sense, the totality of our involvement in the material world should be dedicated to this purpose.[6] The coin will serve as a memento of this occasion and inspire us to use money and all material objects likewise, for good purposes, and, in particular, for tzedaka.

May all these activities lead to the revelation of the ultimate good within the world, the realization that “everything was created for His glory.” [Ethics of the Fathers 6:11] This will herald the coming of the age when “God will reign forever and ever” [Exodus 15:18] – with the coming of Moshiach [the Messiah, descended from King David], who will bring the complete and ultimate Redemption. May it be imminently, Amen.

[2] Furthermore, as quoted in the second book of Tanya, “The Gateway of Unity and Faith,” Chapter 1, the Baal Shem Tov explains that creation is not a one-time event of the past, but a continuous process. At each moment, God is bringing our existence into being anew.

[4] This address was delivered some six weeks before a series of earthquakes in Iran. – Translator’s note.

[5] The data of that Jewish year, 5750 [19’90, the year of the destruction of the Berlin Wall and the fall of communism in Eastern Europe], was expressed by the Hebrew letters which are the initials of the four words which mean, “This shall surely be a year of miracles.”

Presented by AskNoah.org and Noahide-Academy.com with permission of Sichos In English.