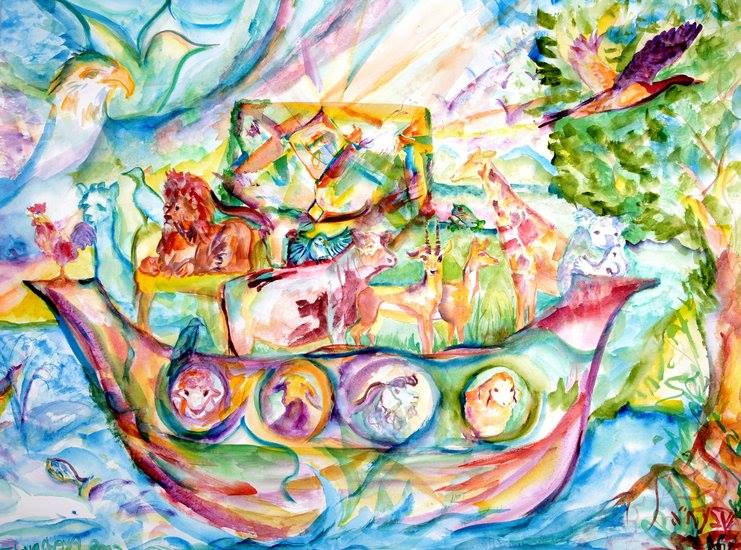 “Noah” [the name Noah in Hebrew] derives from the word “neichah,” meaning “pleasing;” and the repetition of the word “Noah” in the first verse of the Torah portion of Noah [Genesis 6:9] corresponds to two types of “pleasing:” pleasing to God and pleasing to people. This is the idea of teshuvah [repentance]: Beforehand one was in an undesirable state; now, through teshuvah, he has rectified this in the manner of “neichah” - pleasing.

The Torah portion of Noah also stresses the idea of the future Messianic redemption. Chassidut explains the connection between Noah’s ark and a sukkah. Sukkah is the idea of peace, as stated: “Spread over us the sukkah of Your peace.” In Noah’s ark, the idea of peace was also present, for although all animals were there together, no animal disturbed or attacked another. This is similar to the peace of the future redemption, when will be fulfilled the promise “A wolf will dwell with a sheep …” and they will not harm or attack. [Isaiah 11:6]

This is the difference between Sukkot and Noah’s ark: The revelation of the festival Sukkot also affects the world, as we see that on Sukkot, seventy bullocks were offered [in the Holy Temple] corresponding to the 70 nations of the world [Numbers 29:12-34]. Nevertheless, this was only in regard to the nations, but not to a literal “wolf and sheep.” Moreover, the effect of Sukkot differed between the 1st and 2nd Beit Hamikdash [Holy Temple]. In the first, the effect was open — the nations paid tribute to King Solomon; in the second, it was not revealed, and indeed, the Jews were under the rule of the Gentile nations.

The revelations in Noah’s ark, on the other hand, affected even animals, all living together for a year in harmony — “the sheep together with the wolf.” This was similar to the future promise of “a wolf will dwell with a sheep” — and this is the connection between the Torah portion of Noah and the future redemption.

Since such a thing, the revelations of the future, once existed in Noah’s ark, it follows that now it is much easier to effect the future revelation. Moreover, the revelation in Noah’s ark was in a time when the world was in such a low state that they received the punishment of the Flood. Certainly then, after Mattan Torah [the giving of the Torah at Mount Sinai] and after the [Divine] service of Jews throughout the generations, it is now much easier to bring the future redemption.

Just as the greatness of Noah’s ark was the result of one man’s service, Noah -  so too the individual service of each Noahide today in fulfilling the 7 Universal Noahide Commandments in all of there details, hastens the future redemption.

May it be God’s will that through our deeds we speedily merit the true and complete redemption — through our righteous Mashiach, when the promise “a wolf will dwell with a sheep” will be fulfilled — both literally, and in regard to the nations of the world.

Presented by Asknoah.org and NoahideAcademy.org with permission, as translated and published by Sichos in English

The Ultimate Revelation of the Messianic Era

Rosh HaShanah & the Purpose of Creation