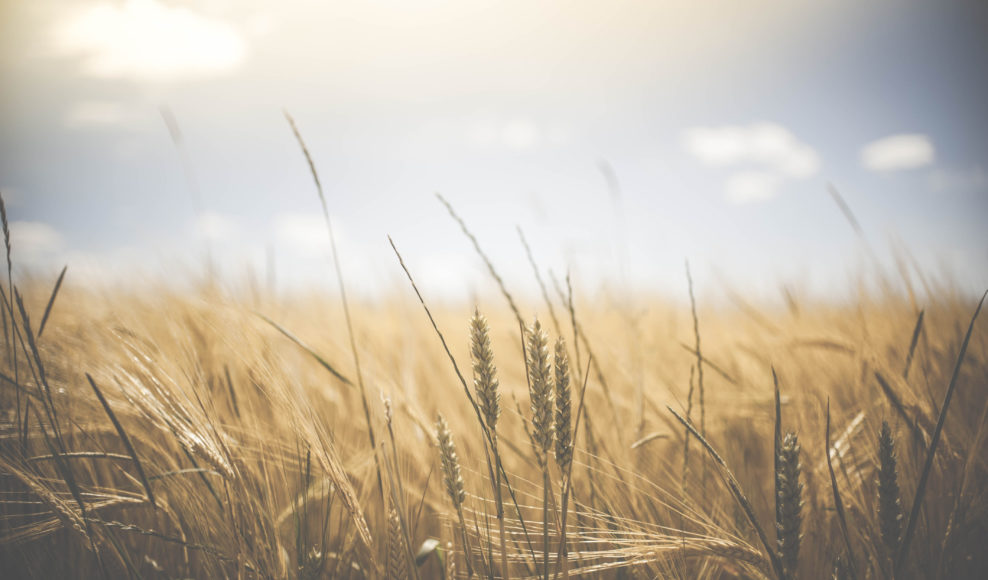 The headlines of the last days of January, 19’92, informed the world that the President of the U.S.A. — and, a few days later, attendees of a meeting of major world leaders — announced the intention to significantly reduce military arms budgets in favor of the more peaceful needs of agriculture.

The following is based on a public address by the Rebbe, Rabbi Menachem M. Schneerson, which reveals the inner meaning of this event. Presented with permission from Sichos In English.*

Background information:
In public addresses soon after, the Rebbe declared that this news signified a tangible foretaste of [the prophecy from Isaiah 2:4: “They shall beat their swords into plowshares, and their spears into pruning-hooks; nation shall not lift up sword against nation, nor shall they learn war any more”…

Humanity learned its first lesson in the ideals of justice and peace when God revealed His Law to the people of Israel at Mount Sinai. It is thus no mere coincidence that the recent portentous meeting of world leaders took place at the time that Jewish congregations around the world read the weekly Torah passage known as Mishpatim. This begins with the words [Exodus 21:1], “And these are the laws which you [Moses our teacher] shall set before them.” Analyzing the opening (Hebrew) words of this passage, the Sages explain: Even the laws regulating interpersonal conduct that mortal understanding grasps and moreover dictates, should be observed — by Jews and Gentiles alike — not by virtue of any transient social or intellectual imperative, but by virtue of their Divine origin.

In the addresses outlined below, the Rebbe teaches us how to react to the headlines of our unique era. Living our daily lives in the harmonious and brotherly spirit of the imminent Redemption will not only grant us a foretaste of the Redemption, but will expedite its coming.

From Armaments to Agriculture

The Baal Shem Tov taught that everything a person sees or hears should provide him with a lesson in his service of God. Therefore, when trying to comprehend any event that takes place in the world at large, we should sensitize our perception — to look beyond that event’s overt socio-economic causes, and appreciate its spiritual message.

In this context, the events of the past week [in January 19'92] take on unique significance. In his annual address to his people, the president of the most powerful nation in the world announced major cuts in military expenditure with the intent that the resources saved be devoted to agriculture and social improvements.

Directly afterwards, he met with the leaders of other world powers — including the leader of the country which until recently had led an opposing bloc of nations[1] — and they joined in this thrust to disarmament, proclaiming their desire to establish [greater] justice and peace.

These efforts are a foreglimpse of the fulfillment of the prophecy[2]: “They shall beat their swords into plowshares…. Nation shall not lift up sword against nation, nor will they learn war any more.” For from “swords”, representing armaments in general, these nations have agreed to make “plowshares”, implements which will cultivate the earth and feed the world’s hungry millions.

In their commentaries on the above verse, our Rabbis[3] emphasize that the nations’ progress towards peace will be motivated by the Mashiach. He will “judge among the nations and rebuke many peoples,” and this will provide them with the impetus to resolve their differences.

In harmony with this motif, it can be explained that the above trend towards disarmament and unity that we are witnessing, results from the heightened desire for the coming of the Redemption that has been expressed in recent years.[4] Rabbis have issued halachic [Torah Law] decisions, ruling that Mashiach must come [immanently]. The attention of Jews — and of mankind in general — has focused on the imminence of the Redemption and the subject has been highlighted in reports in the news media.[5] This process has effected changes within the world at large, producing developments that anticipate the peace and harmony which will permeate the world in the Era of the Redemption.[6]

Nevertheless, as we open our eyes and see so many signs of the Redemption, we cannot help but wonder: Why hasn’t the Redemption actually come? We are at the pinnacle of Jewish history, the time most appropriate for Mashiach’s coming — and yet he has not arrived. Ad Masai! [Until when?!] How much longer must we wait in exile?

Not only does the pattern of events in the world at large give us a foretaste of the Redemption: it also demonstrates the nature of the activities necessary to hasten its coming. The unity, cooperation and sharing espoused by the world powers reflect thrusts that are fundamentally necessary in preparing the world for the Redemption.

Our Sages[7] teach that God created the world so that He would have a dwelling place among human beings. This ideal will be realized in the Era of the Redemption. What is the essence of this concept? — Just as it is in a person’s home that his personality finds expression without restraint or inhibition, it will be in this world, God’s dwelling place, that Godliness will be revealed without restraint.

To allow for this revelation, unity is necessary. We see a precedent for this in Jewish history. When the Jews approached Mount Sinai to receive the Torah, they camped “as one man, with one heart.”[8] This oneness created the spiritual climate necessary for the giving of the Torah. Similarly, to merit the revelations of the Redemption, a macrocosm of the revelations which accompanied the giving of the Torah, we must join together in unity.[9]

This unity must be expressed, not only on the level of feeling, but also through concrete acts within the context of our daily lives. This is implied by our Sages’ statement [20]: “Great indeed is tzedakah [charity], for it brings the Redemption near.” Sharing with our fellow men and seeking their material welfare reflects how the bonds of unity that we share permeate every dimension of our existence.

These efforts should also be accompanied by “spiritual charity,” sharing knowledge.[11] This increase of knowledge will herald the coming of the era when “One man will no longer teach another,… for they will all know Me.”[12]

This emphasis on deeds of kindness and tzedakah should be communicated to others, to Jews and gentiles alike.[13] And as evident from the decision of the world powers to “beat their swords into plowshares,” the climate in the world at large is ripe for these ideas to be accepted and implemented.[14]

In the Era of the Redemption, there will be neither famine nor war, neither envy nor competition, for good things will flow in abundance…. The occupation of the entire world will be solely to know God.[15]

In these days, which are moments before the advent of that era, we have the potential to anticipate this new and forthcoming world unity, and to currently live our lives in the spirit of the Redemption. We can reflect the interpersonal unity which will characterize that age in our present conduct. And these efforts will hasten the coming of that era, when God’s all-encompassing oneness will permeate the totality of existence.

[1] The participation of this nation in these talks is an obvious indication of the transformation that its policies have undergone. In previous years, this nation had enforced its authority through oppression, ruthlessly trying to stamp out all other ideologies. Recently, that entire Communist hierarchy underwent a metamorphosis, giving way to a new regime which has announced its intention to foster the ideals of justice and peace. This reflects a similar process of transformation in this nation’s approach to Jewish practice. Previously, they undertook every effort possible to crush the observance of the Torah and its mitzvos. Now, they are allowing the spread of Jewish observance. In earlier years, the emissaries of the Previous Rebbe had to carry on their activities clandestinely, under the constant threat of danger. Today’s emissaries are free to conduct such activities openly, and, at times, they are even granted the assistance of the government.

[4] This pattern can be seen as having deeper roots. The UN came into being during and after the Second World War, declaring its purpose to be the establishment of peace and harmony between nations. Significantly, it had the above verse from Isaiah engraved on its very wall. What was the underlying cause for this development? — The change in the spiritual climate of the world brought about by the calls the Previous Rebbe issued at this time, “Immediately to teshuvah [repentance]; immediately to redemption.”

[5] Chassidim used to say, “When Mashiach comes it will be reported in the newspapers.”

[6] See Rambam, Mishneh Torah, Laws of Kings 11:4: “He [Mashiach] will then perfect the entire world, [motivating all the nations] to serve God together, as it is written (Zephaniah 3:9), ‘I will make the peoples pure of speech, so that they will all call upon the Name of God and serve Him with one purpose.’ ”

[9] Our Sages (Tractate Yoma 9b) teach that the cause for the destruction of the Beis HaMikdash [Holy Temple] and our people’s exile was unwarranted hatred. Accordingly, if this cause is nullified, its effect, the exile, will also cease. In the present age, however, our main task in this area is not to negate undesirable influences, but rather to prepare the world positively for the manifestation of God’s presence, and in this way, to anticipate the oneness of the Era of the Redemption.

[11] In this context, it is appropriate to mention current efforts to reprint Torah texts that were originally printed in Rashi script, using the more conventional Hebrew typeface, and similarly, the extensive projects to translate sacred Jewish texts into other languages. These efforts allow for the wealth contained in these texts to be shared with many additional readers.

[13] Although tzedakah [charity] is not formally and explicitly one of the seven universal laws communicated to Noah and his descendants, it should be practiced by Gentiles. See Lamentations 4:6 and its explanations, and the gloss of Rabbeinu Nissim to Tractate Sanhedrin 56b. See also Likkutei Sichos, Vol. V, p. 157 and following, where this subject is summarized and documented.

[14] This leads to another concept. On the surface, the importance of sharing among nations and the negation of weapons of destruction is a logical concept that is easily understandable. Nevertheless, throughout the annals of world history, it has never been applied. Why? — Because the spiritual climate of the world had not been refined, and thus the conduct of individuals and of nations was motivated by selfish interests which hampered their ethical development. At present, by contrast, the spiritual climate of the world has changed. All the divine service necessary to bring the Redemption has been completed. It is therefore far easier for people today to rise above these selfish concerns, and to conduct themselves according to the values and principles which logic dictates.

* Copyright by Sichos In English; on-line at http://www.sie.org/library/article_cdo/aid/2468785/jewish/Swords-Into-Plowshares-Disarmament-as-in-Isaiah-5752-1992.htm

Under the Wings of the Shechina

How Are Abortion and Euthanasia Classified in the Noahide Code?