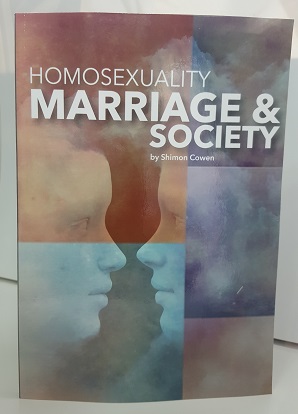 We live in a strange time, a time when moral relativism appears to be ascending and moral absolutes descending. The culture in which we live has created a world with an unprecedented confusion of values, accelerated by social changes occurring at a pace that would have been unimaginable even a generation ago. This new vision of morality (which, in reality, mirrors much of ancient paganism) is often rationalized as a virtually all-permissive, “anything goes” social system founded on a concept of universal “tolerance.”

The question of same-sex vs traditional marriage is part of a larger argument - between two world-views of the human being and society - which branches into important subsidiary questions. Is the human being primarily a physical being, whose polymorphous impulses determine changing moral identities - or the possessor of a conscience or soul, with an objective moral template, that arbitrates between impulses? On homosexuality as a "variant" sexuality with a claim to marriage: does "homosexual" define a person; or is homosexuality something other than the essence of the person, impacting it from outer physical, psychological or cultural sources? With regard to children and marriage: is "love" alone sufficient to warrant the creation of children by donor reproduction for same-sex couples; or do children's deepest needs require full biological identity with, and nurture from, their mother and father?

As for the homosexual him- or herself: is there a valid choice to struggle with one's own homosexuality; or is that struggle the illusory outcome of "internalized homophobia" and therapy to change homosexuality should be banned?

In its consequences for school education: should sexually diverse identities be encouraged in children; or does authentic education mean socializing children into traditional, universal values? Only when the mantras and slogans of the debate are set aside and the different approaches to these questions are examined, can we sense what the real issues and answers are. Rabbi Dr Shimon Cowen, son of a former Governor General of Australia, Sir Zelman Cowen, is the founder and director of the Institute for Judaism and Civilization. His interest in the core universal values at the root of the great faiths and traditions is the subject of his two recent books, Politics and Universal Ethics and The Theory and Practice of Universal Ethics - the Noahide Laws.

Be the first to review “Marriage and Society” Cancel reply