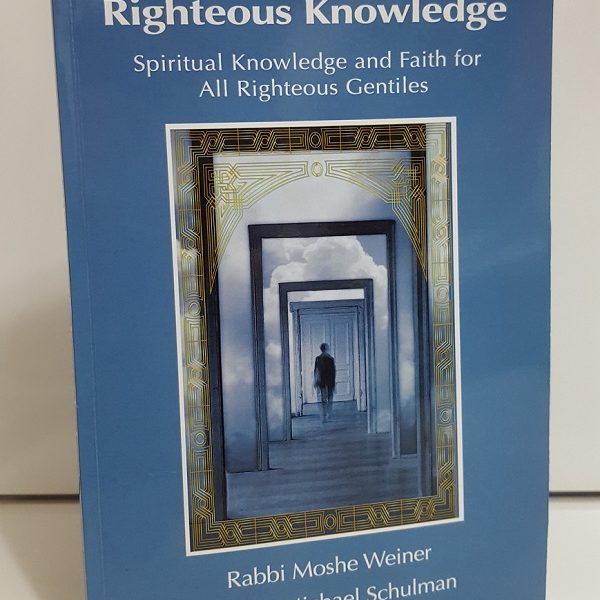 The Seven Gates of Righteous Knowledge is a long-awaited, concise and practical guide to attaining spritual growth and inner peace as a Righteous Gentile – one who accepts and follows the Seven Universal Commandments given to the Children of Noah. Written in clear and concise terms, the book provides a spiritual and moral path for anyone seeking a closer personal relationship with our Creator.

Spiritual Knowledge and Faith for Humanity

THE FIRST GATE: The Gate of Knowledge of G-d
1. Recognition of G-d’s Existence and His Essential Unity
Drawing Closer to G-d on a Personal Level; Explanations from
Torah of G-d’s Existence; G-d’s Total Incorporeality and Unity
2. The Unity of G-d and His Powers; The Mistaken
Belief in Independent Deities
3. Divine Providence and Trust in G-d
4. Bringing Recognition of G-d into One’s Heart and Actions

THE THIRD GATE: The Gate of Serving G-d
1. The Essence of the Service of G-d
2. Contemplation of the Seven Noahide Commandments
and Lessons from the Hebrew Bible
3. The Value of Action, Intention and Happiness in
Serving G-d

THE FOURTH GATE: The Gate of Prayer to G-d
1. The Service of Prayer
2. Prayer with Speech and Intention

THE FIFTH GATE: The Gate of Personal Traits Desired by G-d
1. The Definitions of Behaving as a “Wise Person”
or a “Pious Person”
2. Healing the Soul from Unhealthy Traits
3. Guarding Oneself from Sin; Going Beyond
the Measure of the Law
4. The Trait of Modesty
5. Influence of One’s Environment; Rebuking Another Person
6. Loving Other People and Respecting Other People
7. The Care that a Wise and Righteous Person Must
Take in Speaking
8. Respecting People who Suffer Misfortunes; Honoring
Parents; Honoring One’s Spouse; Educating Children
9. Charity and Acts of Kindness

THE SEVENTH GATE: The Gate of Repentance to G-d and the Principle of Reward and Punishment from G-d
1. Contemplating Repentance to G-d
2. Achieving a Complete Repentance
3. How G-d Judges for Rewards and Punishments
4. The Future World to Come and Who Will Merit that Reward
5. Free Will
6. The Obstruction of Free Choice as a Punishment from G-d
7. The Heavenly Reward for a Departed Soul; A Person’s
Reward in the Future World to Come
8. The Messianic Era and the Resurrection of the Dead

This work was inspired by the book Sefer HaMadah (The Book of Knowledge), which is the first volume of Mishneh Torah, by the great Rabbi Moshe ben Maimon (Maimonides, or Rambam). As the first part of his monumental codification of the Oral Torah, it explains the Torah's path to true and proper faith-based knowledge. What the world has been lacking until now is a parallel book written specifically for the fundamentals of faith that apply for Gentiles (Non-Jews), because much of the content of Rambam's work applies only for Jews.

The essential points of our present book

Much of its text have been taken from the universal parts of the holy words in Sefer Ha'Madah, Beyond that, we have added a great amount of background information and explanations to produce a book that is intended specifically for those who are, or who want to become, righteous and pious Gentiles - Noahides, in modern terms - in God's eyes. In this book, we have included many of the proper and righteous outlooks, character traits, and goals for life that will provide much-needed guidance for Gentiles who are searching spiritually for an authentic personal connection with the One True God. In summary, this book presents the proper views and behaviors for Righteous Gentiles of any nationality or culture, and it will serve as the next milestone for the modern Noahide movement.

About the Author
Rabbi Moshe Weiner of Jerusalem is a highly accomplished Torah scholar, who has dedicated years of work to the compilation and explanation of the authentic Torah-based Noahide Code, and the guiding principles for modern-day observance of the righteous path for pious Gentiles. He is the author of the renowned codification of the Seven Noahide Commandments, titled Sheva Mitzvot HaShem (in Hebrew). Rabbi Weiner was also fully involved in the preparation of the entire text of the English translation, The Divine Code.