The Past of Our Future: Secrets of Noah's Ark

An exclusive course is being prepared for the Noahide Academy by Rabbi Dr. Michael Schulman, based on the decades of technical research by Eng. Joseph Silver, o.b.m.

The story of Noah has captivated the imagination of everyone who has had access to the Book of Genesis, for over three thousand years. So much so, that in our days, a great fortune has been invested to build a replica of Noah's Ark in Kentucky as a major tourist attraction.

As more and more people get back to the Bible in our present troubled times, one of the first episodes encountered in the Book of Genesis is that of Noah and the Flood. Questions immediately come to mind: Besides Noah, who built the Ark? How long did it take Noah to build the Ark with the tools he had available? On a deeper level, what is the Ark's meaning for us today, and how does it relate to God's covenant with humanity? Whenever there is a report that Noah's Ark was found, there is surge of interest and excitement.

The textual basis for the reality of Noah's Ark is presented through the Bible verses that describe its size and construction in greater detail than one would expect. This provides an opening for determining the external and internal dimensions for the Ark and its "Ark-itecture," through which one discovers a consistent and highly probable description for the self-contained ecosystem that Noah constructed.

Would a design flaw be found in analyzing the Ark's structure using modern engineering computer analysis? To validate the engineering estimates for the Ark, its design (as instructed by God to Noah) was submitted to a naval architecture firm, which evaluated it for seaworthiness. A digitized model of Noah's Ark was analyzed using software developed for the U. S. Navy and Coast Guard. Amazingly, they found that Noah's Ark exceeded the present-day international codes for an ocean-going vessel of its class! The Ark can be considered a barge for design purposes and, as such, it was found to be in compliance with one of the world's foremost regulatory agencies. 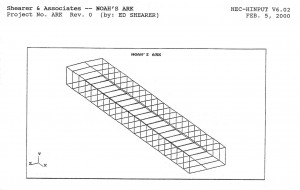 The Ark was made of Cypress Wood and is estimated to have weighed over 14,000 long tons. The estimates for the weight of the cargo includes the animals, food, soil (for planting crops that were harvested for food), waste, and the 8 humans on the Ark. On the first day of the Flood, there would be 100% food and crops and practically no waste; on the last day, there would be less food, but 100% waste. (This is true, of course, unless the waste was discharged overboard which would involve a large human effort and an exemption from the U.S. Coast Guard's regulations on discharge of sewage at sea.)

The animals were located on the second deck; the soil, food (crops) and human contingent on the third deck; and the waste at the bottom, in the hold. An educated estimate considers between 18,000 and 36,000 animals on the Ark, and within this entire range the stability of the Ark was acceptable by the modern standards for passenger ships (with the animals as the great majority of the passengers).

The U.S. Coast Guard also dictates survivability criteria for passenger vessels. The Ark had no watertight integrity against damage penetrating its outer walls. However, in the operating environment at that time for the Ark, in the midst of the Great Flood, there were very few obstructions and other vessels that could cause damage.

In summary, based on modern engineering analysis, the Ark was structurally sound, with sufficient stability and buoyancy for the precious cargo it carried. It was God's design (His Contract Plans and Specifications). The engineering analysis presented in this course proves that God incorporated all of the required design features into this famous vessel that saved life upon the face of the Earth. But this course does not stop there, because everything in the Hebrew Bible provides useful lessons for our lives...