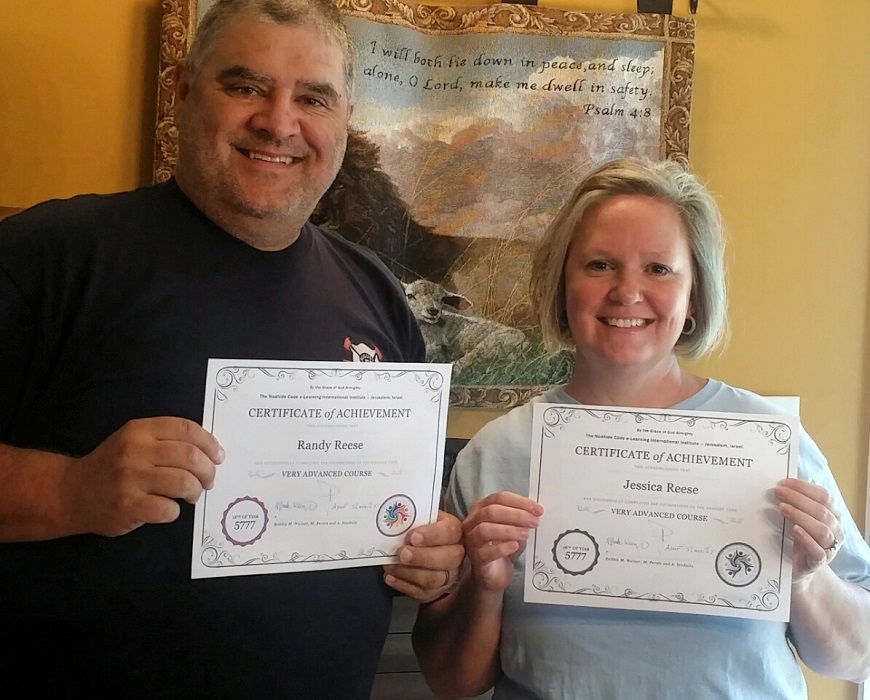 "When my husband and I first began the Noahide Academy we had no idea what to expect.  We only knew we were seeking more guidance and knowledge to properly serve G-d, as well as learn our place in the world to come. We knew that a Noahide is essentially any human being who is a descendant of Noah, as opposed to Israel, who are descendants of Abraham, but we didn't know exactly what to do with this information. Baruch HaShem!!...the education we have received from the Noahide Academy has been incredible.

It's been several months since our enrollment and we are already in our 5th course at this point. The presentation of educational material from day one, class one, has taught us what is applicable to Noahides, not dwelling on areas that are not our obligation. From the beginning we learned about what it exactly means to believe in G-d.  We have had clarification on the teachings of the Sages on the Ancient Covenant with G-d for all mankind (the Seven Universal Laws aka Laws of Noah/Noahide Law) as well as the difference in comparison to the Covenant at Sinai when the Jews accepted upon themselves the 613 commandments.

This is very important because the Noahide Law is very complex in nature as it too covers issues such as the belief in G-d and the many forms of idolatry, blasphemy, murder, theft, sexual misconduct, treatment of animals as well as establishing court systems within society.   I cannot stress enough how starting from this most basic approach has taught us how to not only apply it to our lives on a daily basis but also how to share with others.

After all, the Noahide path is the path of spiritual fulfillment for all mankind.  This is referenced in the Torah as well as the Oral Tradition, as taught by the Sages, but it's also evident in the historical accounts of righteous people such as Adam, Enoch, Noah, and Abraham, and of what their relationship was like with G-d before the giving of the Torah. As previously stated, these people had a very fulfilling relationship with the Creator prior to Torah or the invention of other so called "religions", and we wanted to know what this was based upon.   Obviously this proves there was a spiritual connection with G-d that is universal, for all mankind.

Therefore, when a gentile wishes to take upon himself the Seven Laws of Noah and live a righteous life according to Torah, he needs to be informed on exactly how to do that.  With HaShem's help, the Noahide Academy has offered to our family exactly that.  It is very expansive in it's application of material in written and oral format. The curriculum within each course, in addition to the order in which the courses are offered, prove that our learning goal of spiritual fulfillment with our Creator are clearly understood and nurtured throughout the entire program.

We have access to courses and weekly webinars but also continued open access with not only the overseeing Rabbi's, but as well as Noahides from around the entire world. The reading material and video lectures provide much depth in understanding within the curriculum of each course.  Everything is very clear but when something is more challenging, the Rabbi's are always available to clarify and expand on the teaching. For my husband and I, these features in regard to learning and education are exactly what we were looking for.  Afterall, the Noahide Law is the very foundation of society since the creation of humanity.

Within this, every human being can find a fulfilling relationship with the Creator through the wisdom of the Torah as applied to everyday life.  This endeavor comes not only from faith that is in the heart but also a covenant that is based on action in truth, since the real core of a person can be decided simply by the way in which one behaves.

We're thankful to haShem for allowing us to be able to respond to our desire to be more connected to Him by having access to this online courses, as well as to Pious Rabbis who established a Rabbinical Council to guide and teach us, through the Noahide Academy (NCLI) in Jerusalem and who help building Noahide Communities throughout the world.  This, all inclusively, has brought so much joy and blessing into our lives, both materially and spiritually."

Rabbi Turen Delivers Invocation at the Senate of Illinois

Women of the Bible